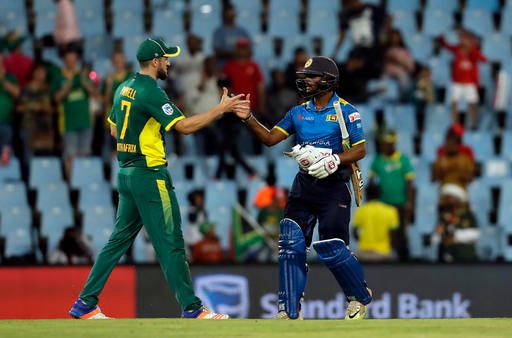 Sri Lanka vs South Africa 3rd T20I: South Africa beat Sri Lanka by 10 wickets in the third T20 played at the R Premadasa Stadium on the back of the brilliant innings of former captain and wicket-keeper batsman Quinton de Kock (59 not out) and Reeza Hendrix (56 not out) to take the three-match series 3-0. Got your name. Batting first after winning the toss, Sri Lanka scored 120 for eight in 20 overs. In response, South Africa chased down the target easily in 14.4 overs without losing any wickets.

Dekock and Hendrix were the heroes of this historic victory of South Africa. De Kock scored an unbeaten 59 in 46 balls with the help of seven fours and Hendrix scored an unbeaten 56 off 42 balls with the help of five fours and a six. In this three-match series, de Kock scored runs at an average of 153.00. Seeing his excellent performance, he got the title of Player of the Series.

South Africa became the first country to do so

South Africa defeated Sri Lanka by 28 runs in the first T20 match, while in the second and third T20 by 9 and 10 wickets. Thus South Africa became the first country in the T20 format to clean sweep Sri Lanka in at least a three-match series at home.

Kusal Perera scored the highest 39 runs in Sri Lanka’s innings in the third T20. Apart from this, Chamira Karunaratne remained unbeaten on 24 runs off 19 balls with the help of two sixes, while captain Dasun Shanaka scored 18 runs, Avishka Fernando scored 12 and Kamindu Mendis scored 10 runs. Apart from these, no other batsman could cross the double digit mark. For South Africa, Jorn Fortuin and Kagiso Rabada took two wickets each, while Aidan Markram, Keshav Maharaj and Vian Mulder got one wicket each.

Mumbai Indians is also the strongest contender for the title this time, the team’s batting and bowling are very strong.