Impact on realty sector: 95% of projects may be delayed due to Kovid, CREDAI survey revealed 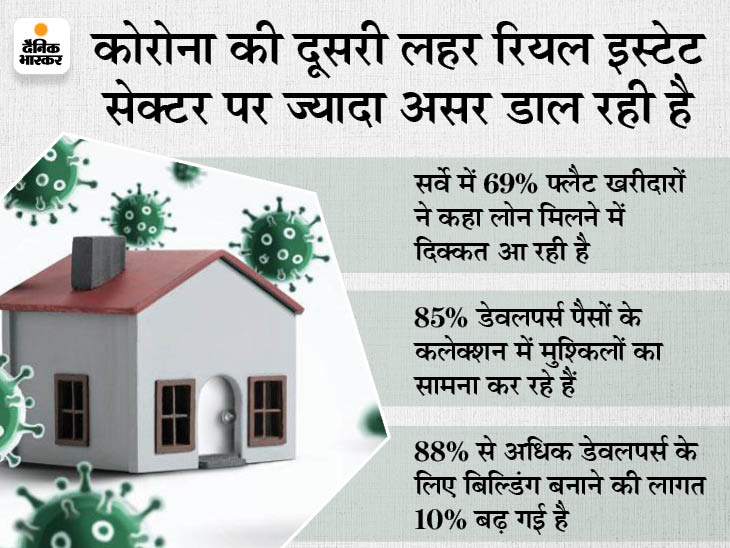 A survey by the Real Estate Developers Association of India (CREDAI), a nationwide organization of builders, has found that 95% of the projects of builders across the country may be delayed due to the Kovid epidemic. This can also increase their cost.

The survey also revealed that developers want announcement of relief measures from the government and the Reserve Bank of India (RBI) to avoid further delays in project completion. The CREDAI report states that there are many reasons behind these possible delays which have been attributed to them. In this 92% of developers are facing shortage of laborers on site. 83% of developers are working with less than half the workers. More than 82% developers are facing delay in getting project approvals.

There was a lot of trouble in the first wave

CREDAI NATIONAL President Harsh Vardhan Patodia said that the real estate sector had made a decent recovery after facing several other hardships in the first wave despite some relief measures. However, the second wave has forced a re-measurement and review of the growth trajectory of the real estate industry. We felt it was important to assess the challenges faced by customers and industry partners from recent events.

The CREDAI Chairman said that the findings suggest that the second wave has had a more negative impact on the real estate sector than the first wave. In addition, factors such as a rise in the prices of construction materials, including steel and cement, have contributed to a more than 10% increase in construction costs for over 88% of developers.

The problem is getting worse due to constraints and lack of money.

Patodia said that in view of this survey, his organization has given a representation to the government and has requested to take immediate relief work accordingly so that real estate can regain its old pace and contribute to the development of the country.

Matter of work: By June 30, settle these 5 important tasks like filing income tax return and linking Aadhaar-PAN, otherwise you will have to worry

Tax or no tax, UAE aims to remain magnet for investors – Times of India